Ladies Back on song

The Ladies 1st Team bounced back from a hard fought loss to Hampstead and Westminster by thumping Northampton 5-0 on Sunday. An outstanding goal by Katie Wales set them on their way with two from captain Alex Robinson, one from Millie and one from Emma.

Here is a picture of the Ladies warm down routine after two matches in two days !! 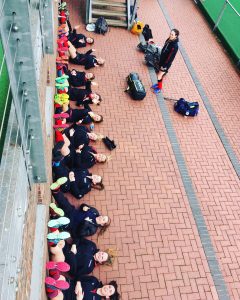 The Ladies 2s also had a vital win holding on to beat Marlow 2-1 in a nail biting finish. Special mentions to Frankie Cox straight off a skiing holiday to score a vital goal and Lucy Thayer for the other. From bottom to 4th from bottom in two matches. Very encouraging.

Ladies 3s fought hard against top of the table (by miles) Hampstead and Westminster 3s. Southgate impressed with their passages of play, particularly on the break, but couldn’t manage to get the upper hand in the first half going 2-0 down. In the second a great pass from Caroline allowed the ball to reach Immy B who calmly smashed it past the keeper into the far corner. Unfortunately a high tomahawk from an ex bath uni ladies 1s player put the final score at 3-1 to the oppo. Despite this the ladies are more than happy with the hockey they showed today, and will bring that confidence forward. Man of the match votes were spread throughout, but Charlotte K clinched it with her great work playing out of position in defence. She was closely followed by goalie Izzy (great saves and organisation) and Chloe (fantastic running on and off the ball).”

4s lost narrowly at home to Eastcote 3s by a single goal to nil. There was some fine defending on display however, and Woman of the Week honours were shared by left back Jess Hayes and tireless midfielder Laura Dawson

Ladies 5 beat league leaders Indian Gym 3-1 this week with a text book display of energy and determination; it just shows how a positive mindset is a skill.  The sun shone and Southgate reigned as we kicked off  the scoring with a sweet pass from Pippa across the D, swept in by well-positioned Matty.
Coach Paulie (congrats on his USA men’s selection!) should be proud after his work on vision, using space, and quickfire passing at training was put into action as we pinballed around the pitch and stretched the opposition. As we gained a grip on the game and began to press high we freed Pippa who picked up the ball 40 yds out and, with a balletic display in getting your feet round at a tight angle in the D, teed up and struck a belter into goal. At half time it was 2-0.
With the sun lowering and threatening our Izzy’s eyeline in goal, we started the second half and I sensed they were trying to get the upper hand. But in reply we ratcheted up our work rate several notches and Southgate slowly and surely edged into a dominant position.  IG looked increasingly unlikely to score from free play so a breakaway pass from the oppo and a defensive error was a surprise and it put the score at 2-1. But, we were not going to lose this one.  After regrouping and a period of sustained pressure at the mid-half MOM Pippa shelled in a third.  Victory puts the 5s in fourth position with five games to play and that top 3 finish is still not out of reach.