Ladies teams caught out by fireworks!!

Remember remember the 5th of
November… or not.
Southgate Ladies 1s  met West Herts which turned out to be an exciting and competitive match with plenty of fireworks.
Southgate took an early lead when Caity Wales scored a superb reverse stick after a pin point pass from Amy Kokkinos. While the remainder of the first half went on without much incident, the second half prove to be far more  gruelling. West Herts continuous attack was well met by the likes of players such
as Bobbie Burkin in defence and hard work in the midfield by players such as Emma Fairhead. In a frantic flurry of play both sides saw many missed opportunities. Special mention must be made to Jess Hudhud for a crucial penalty stroke save to keep us in the game. However a few narrow misses left Southgate with a heart sore 1-1 draw. Leaving the girls with some unfinished business and a desire to bring their A-game in the next few fixtures.

Ladies 2s had a match of two halves. Best performance of the season had them 1-1 with Witney 1st Team but a poor 15 minute spell spoiled the hard work. 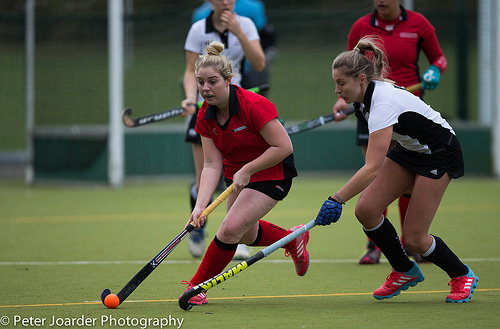 Lucy Thayer takes on Sunny Ricketts away at Witney

The ladies 3s had a top of the table clash away against Hampstead and Westminster 3s. Southgate started the game (bon)fired up, and the home side were put a goal behind in the first 5 minutes. It then became a half of ping ponging goals, with the half time whistle going at 3 all. In the second half Southgate made it hard (fire)work for themselves, getting caught on the back foot with their man marking, and making some silly turn
overs. Hampstead and Westminster consequently managed to bang the ball into the goal a number of times with an end score of 9-3.
Despite the score, Southgate come away on a positive (and look forward to the home advantage), as they put on a good display with some glimmers of sparkling hockey. Caitlin’s made some explosive leads down the wing, driving the baseline and perfectly setting up goals from excellently positioned Cob, Suzie and Gaby MP. Caitlin therefore resoundingly was voted man of the
match.

Really spirited, imposing performance from the 4s this week playing much improved hockey away against Eastcote 3s. Went down to a well struck short corner goal before equalising with a great “shortie” of our own thanks to Michelle Joubert. Narrowly lost out 2-1 as a late 2nd half effort clinched it for the home side. Woman of the week was tireless winger Laura Dawson.

And finally a detailed report from Ladies 5 captain Pauline;

No one likes to concede so many (8-0 to IG) but as the bumper sticker states “you learn something from everyone you meet”. We need to learn from this loss. No question IG are a strong team, on a mission to get promoted, but we didn’t really do ourselves justice today; the basics were not executed well and we had sloppy moments, with lazy reverse stick trapping and pushes straight back into trouble zones. This made it easy for a nimble and alert opposition to pick the ball and get straight back on the attack, even when we had won the initial tackle.
IG set the tone early with a PC strike, taking them a goal ahead.  We then went in to a spell of pressure which were managing to contain. But at no point were we in control and in spite of Karen’s excellent keeping, between free play goals and more corners we went in to half time 6-0 down. The team talk centred mainly on reinforcing the basics but also on the the fact that everyone should be in the match 100% of the time. You are either part of building the attack or you are part of bolstering the defence that means we are pretty much running/moving the entire time we are on the pitch.
The second half was a definite improvement. With closer marking by Beth, Phillipa and Heather, and better use of the width out to Emily, Cat and Emma, IG only managed to get two more goals. Lynn, Maddie Rhianna and Lilja had a better supply route from some flowing midfield movement with Maddie and Rhianna having chances to score, but even a consolation goal was not on the cards today.