The M1s got back to winning ways on Sunday recording what was in the end a comfortable 4-0 win over local rivals West Herts, and in the process moved back to the top of Men’s Hockey League East Conference.

The first half was a fairly even affair with both teams having chances, and indeed West Herts squandered three penalty corners thanks to Enrico Francesconi in the Southgate goal making a couple of sharp saves. It was however Timmy Smyth of Southgate who opened the scoring in the eighth minute, and as the half progressed, Southgate started to dominate possession going into the break on top.

The second half started in a similar vein to how the first ended with Southgate enjoying good spells of quality possession, and it was no surprise when Giulio Ferrini got their second in the fortieth minute, followed by the third with Adam Miller volleying in from close range to get his first goal of the campaign. John Sterlini got Southgate’s fourth with six minutes to go, after West Herts failed to clear a penalty corner, the ball falling to Sterlini to shoot home from the top of the circle.

With others results going their way, Southgate are back on top of the East Conference by a single point, and go to Oxted next Sunday for their final game before the winter break. 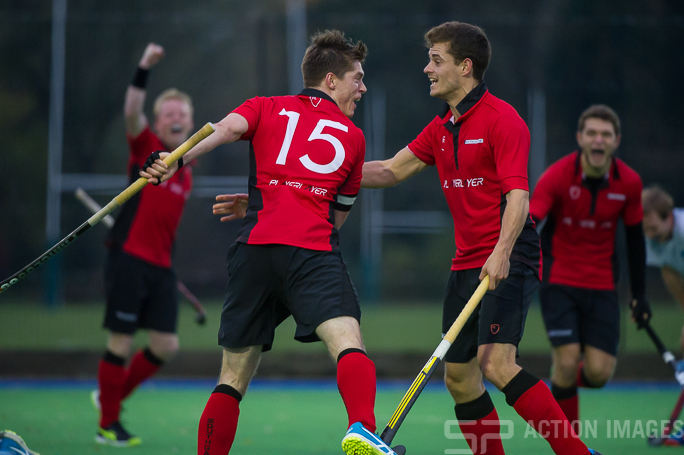 The M2s lost 2-0 to Spencer which sees them slip down to fourth in the London Prem Division.

The M3s drew 1-1 with Spencer and they remain in second place in London Div 1.

The M4s won 5-2 against Kings Alleyns which sees them move up to ninth in London Div 3.

The M5s had the weekend off.

The Flagons won 4-1 against Spencer and remain top of London Vets Div 2.

The Magnums lost 3-2 to Spencer and drop to tenth in London Grand Masters Div A.

The Pitchers won 4-0 against Bedford and are second in East Div 8SW.

The last remaining unbeaten record in the club record went when Tankards X lost to Tankards Y 3-2 but they remain top of East Div 9SW.

The Tankards Y got one over Tankards X winning 3-2 which sees them remain second in East Div 9SW.