The M1s made their second trip in consecutive weeks to west London on Saturday to relegation threatened Indian Gymkhana, and returned with three points, recording a 4-2 win.

The opening period was fairly even with Southgate probably enjoying more possession, but struggling to find a way through the Indian Gym defence, while the hosts created a couple of opportunities on the break although neither troubled Allan Dick in the Southgate goal. The deadlock was broken in the twelfth minute with Southgate scoring after Indian Gym failed to clear a penalty corner after an initial save by ex-GB goalkeeper Simon Mason, the balling falling to Jonny Maunder to fire home.

Thereafter Southgate took control and looked to extend their lead, forcing Mason to make a number of saves as the pressure built. Their second goal came in the nineteenth minute as John Sterlini drove into the circle, his cross beating the advancing Mason, to find Simeon Bird on the far post who deflected the ball into the open goal.

Indian Gym started strongly after the interval, with Hayden Beltz getting a goal back in the forty second minute, but they were unable to build on this with Drew Burkin restoring the visitors two goal advantage via a forty –ninth penalty corner.

Southgate made the match safe when they extended their lead in the sixty first minute with the ball falling to Jonny Maunder on the far right of the circle, who lobbed the advancing Mason, finding Will Holt in front of the goal who then finished with an overhead straight from the tennis court. Indian Gym managed to get another goal back via a Marcus Mahne penalty corner in the sixty forth minute, but time was against them and the match ended without further score.

Sunday sees Southgate’s last match of the season as they welcome Brighton to Trent Park. 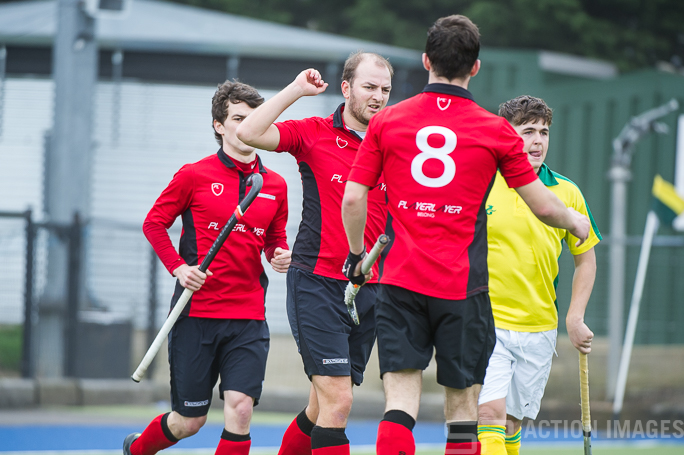 The M2s finish 3rd in the London Prem, one point behind Canterbury in second. Hampstead & Westminster top the table a further 11 points clear. The Playoffs now beckon. The M2s now also know that they will face London rivals Surbiton in the final of the 2nd XI cup which has now been confirmed for the 1st May (Bank Holiday) at Lee Valley.

The M3s are still top of London Div 1 although this is on goal difference from Hampstead & Westminster 3s who still have one match to play.

The M5s lost 0-3 to PHC Chiswick and currently sit eighth in Div 5. Having finished their fixtures, if other results go against them, they could slip to tenth.

Tankards Y – Made hard work of beating beat Stevenage 5ths 2-1 on an awful pitch .
By our calculations Y now will be either 2nd or 1st .  MOM  Welcome guest Howard Clayden