U16 Girls finish 7th at Nationals

The U16 Girls were ultimately disappointed not to progress from their group to the Third place play-off match at the National Championships in Wakefield. Having dominated two of their three games, and only losing to eventual Champions Repton, they were unfortunate to head home early in 7th place overall.

The Tournament opened with a game against Reading and a very even first half in which neither team could find a goal. The closest Southgate came was a short corner and Hannah Kilpatrick’s flick being pushed away by the exceptional Reading keeper. Shortly after half time Reading broke the deadlock when a goal-bound shot hit Megan Langley’s foot on the line; Reading made no mistake from the spot. The remaining 20 minutes of the match was dominated by Southgate with the Reading keeper making several notable saves, amongst which both Maddie Axford and Hannah had flick’s from short corners turned away expertly, and a double save when both Ella Sherring and Maddie (again) fired shots in. With Southgate pressing forward and throwing caution to the wind it took an excellent block by Chaela Lambrias to prevent Reading extending their lead from a breakaway. Finally with just 90 seconds remaining on the clock Southgate attacked again and with the ball pinging around the Reading D Kiera Murphy managed to guide the ball home from close range to give the Girls a well deserved equaliser.  There was still time for Reading to launch a final attack and for the umpire to award a highly controversial short corner (unbiased expert analysis* confirmed that as the ball was rolling 5 yards couldn’t be determined and as such the free hit should have been retaken). The corner would be the last action as the hooter had sounded, and the Southgate defence charged out to block  bravely and clear the danger. Result Southgate 1 Reading 1

After a break back at the hotel the Girls returned to the Ground to play the Favourites for the Championship, Repton. The Repton team and supporters were in confident mood having beaten Spencer in their opening game 2-0, but it was Southgate who started best. In the first 5 minutes the girls created 2 excellent chances, with Alice Peters almost opening the scoring, and in the early stages the game was end to end. It was a surprise that it took 15 minutes before a goal was scored as it was so open. Repton grabbed the lead from a short corner. Southgate were fighting hard, perhaps a little too enthusiastically as shown by an early green card for Ella, but the very strong Repton midfield had exerted a control on the game and were pinning the girls in their own half . Following another corner Repton added a second goal when a fierce cross was turned in expertly at the far post; this was compounded by a second green card of the game, this time for Hannah. Repton took full advantage of the team being down to 10 by carving through to add a third goal before half time. With a mountain to climb the girls didn’t allow their heads to drop and took the game to the favourites in the second period. There were chances at both ends but Southgate were having the better possession and with 10 minutes remaining Scarlet Spavin capped a fine performance in midfield by gliding a shot into the corner of the net from the P spot. Southgate couldn’t make a further break through which might have seen their opponents wobble and the better, more clinical team, came out on top. Result Southgate 1 Repton 3

The girls were dejected at the end of the first day but still had a play-off to place up for grabs on the Sunday morning. Spencer had beaten them in the League Finals two weeks earlier and were in confident mood. The first half was a relatively even affair with Southgate looking the more threatening team. Ella had one reverse shot which whistled past the post (and Alice’s head!). The Southgate defence with Megan, Hannah, Hermione Kaye, Honor Hewitt, and Hallie Copping Jones in total control when Spencer did venture forward. Very early in the second half another controversial short corner award led to Spencer taking the lead. Maddie’s stick tackle was outside the D (just) but the umpire with the clearest view was having a rather indifferent day. The set-back could have led to the Girls losing heart but nothing could be further from what then transpired. The team roared into life and dominated the remainder of the game. With Hannah, Maddie, Ella, Tabby Collier and Scarlet all driving forward Spencer were defending for their lives. Chances were coming thick and fast, Ella should have finished off a neat short corner routine on her forehand but didn’t get much contact on the ball first time but recovered to control the ball and cross for Megan to force home amid flying sticks. To Megan’s clear frustration the umpire disallowed the goal as she thought there had been an infringement (told you she was having an indifferent day). To add insult to injury (how apt)  Megan lost a tooth in pushing the ball home. Another attack saw an almighty scramble and just as the ball was put in the net the Umpires whistle blew and instead of a goal we had a flick. Fortunately Hannah, who’d had a fantastic game, wasn’t going to be denied and slammed the ball home to level the game up. Southgate knew they needed a win to progress and threw caution to the wind. It almost backfired as Spencer broke away on two occasions only to be denied by excellent saves from Issy Gardiner, however the main action was happening in the Spencer half. The girls were trying everything to force a win,  Maddie had another good flick from a short corner turned aside by the keeper, Hattie Shrimpton almost got on the end of a cross but a stick nipped the ball away just as she was about to shoot, and with 60 seconds remaining Ella had a ferocious reverse well saved by the keeper. Result Southgate 1 Spencer 1

All the effort proved in vain, and indeed a second goal wouldn’t have proved enough as Repton lost to Reading in their final group game having rested a number of starting players (they did however go on to win the final). The Girls can be very proud of their efforts and actually only lost one half of Hockey out of six! All the girls gave everything to the cause and seventh overall in the National Championships is still a  great achievement, but special mention to Scarlet and Hannah who were outstanding across the three games. Thanks to John as ever for leading the team to the finals, to super spy Martin Foxall ( the backdrop to his team talk on Saturday evening being a personal highlight), to Sheila Langley and Richard Mee for the organisation and management of the weekend, and all the fantastic parents who came to support, we were the loudest supporters  by far! 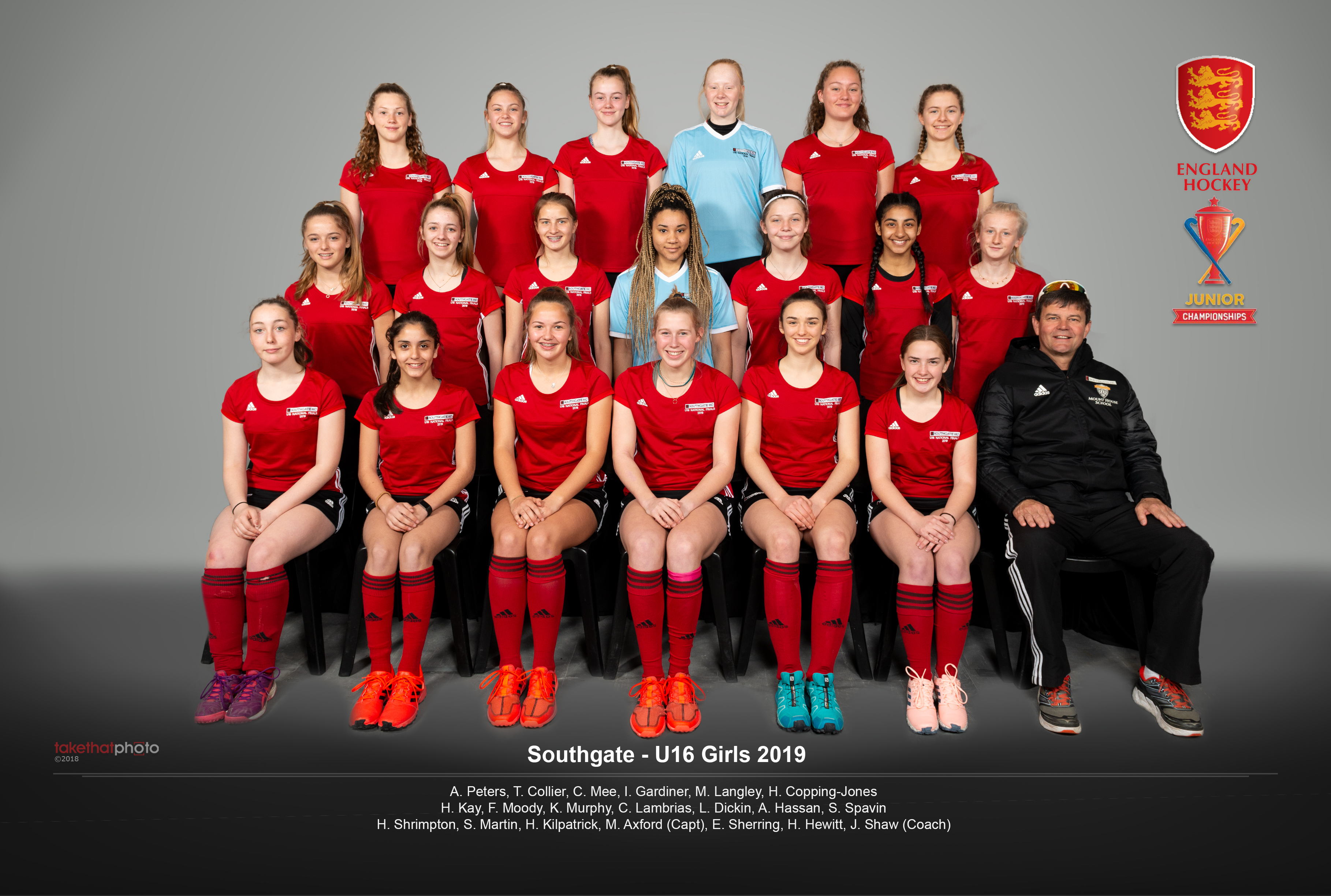