What a turn around!!

The Ladies 4s after a period at the bottom of the table have now won 4 matches on the turn. The team came back from a goal down to win 7-2 with Hannah and Magda grabbing a brace each and Danielle, Julie “J-Rod” and Gill all getting on the score sheet too. Small wonder our Woman of the Week votes were spread far and wide with a four-way tie between Alice Broderick, Ella Sherring, Megan Langley and J-Rod. Last word is one of thanks to Julie Bragg who stepped up from the 5s and into the GK pads this weekend to help us out. Well played!

The ladies 3s had a very disappointing 2-0 loss vs West Hampstead 2s. As per previous weeks, the chances on goal were many. With some agonisingly close balls to the line and some missed opportunities we went into the second half at 0-0. Unfortunately two silly mistakes, probably the only two we made, left players free in the D and the oppo managed to slot two past the keeper. Very disappointing as our result doesn’t reflect how well we payed. Great debut performances from Leona and Beth, with votes going to them, Jenni and Ros, but MoM went to Millie for her versatility, superb leads and calm and collected facing of the problem while on the ball.

Ladies 5s – an extraordinary result against Chiswick 5s. A victorious Southgate 5s went 1-0 down just before the half, and raised their game to win 3-2. 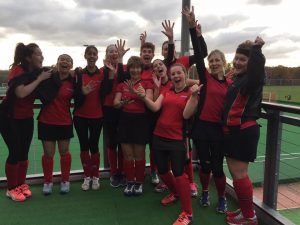 A two on one with goalie Karen gave first blood to Chiswick just before half time: it was probably fair that they scored first. We’d sloth’d our way through the first 35 minutes in a shambolic fashion. Time to draw a line under the first half and squirm away to the goal for Haribos and a rethink.

Enter Fives version 2. A few minutes into the second half Megan’s anti-skill, reverse stick goal brought us even, and magically flicked a switch. Self-belief arrived in spades. Though scary moments ensued we began to spread the ball, and hold the midfield. An increasing number of circle penetrations finally resulted in a short corner and Mach shelled it left of the goalie and “boom” goal number 2!

By now Chiswick we’re down to 10 players and courtesy of a “to me to you to me” Chuckle Brothers move between Jo and Lynn, Lynn slotted away goal number 3. The crowd went wild but Chiswick showed just how quickly fortunes can shift with a last minute PC which brought them to 3-2.

But we were within seconds of the final whistle and as we pushed back that gorgeous, mellifluous, peep peep peep sealed the deal: a precious win, hugs all around, buzzin’ tea chatter, team photo and the warm glow of a job well done.