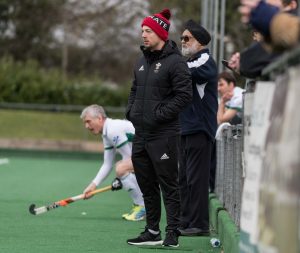 It is with much regret that the Club has to report that Danny Newcombe – our Men’s 1st Team Head Coach – has decided to resign from his role at the end of this season.

Danny has been with the Club for the past three-and-a-half years and been the Head Coach for the past two seasons. During this time the M1s have been pushing for the play-off spot in the Conference East League for promotion to the National Premier Division and the team has been playing some of the best hockey seen at Southgate for many years.

The squad has grown in strength during Danny’s tenure and we have attracted high quality international players to the Club – there is strength and depth that has been created that bodes well for the future and will give Danny’s successor a great platform from which to start.

Danny has also been leading the elite coaching for the Boys Performance Academy which was established in 2017 and his efforts in this area have been hugely appreciated as the Club seeks to develop its home grown talent.

The Club recognises that Danny has numerous demands on his time and that he needs to refocus his priorities beyond the end of this season. An increased focus on his international commitments will mean he can no longer play an active role in club hockey.

We wish Danny our very best, we thank him for all his hard work and commitment to Southgate and we wish him every success with the Wales National Team as he heads off to the Commonwealth Games in Australia.

Danny himself has asked to relay the following message:

“It is with great regret that I have decided to step down from my role at Southgate Hockey Club. I would like to take this opportunity to thank everyone at at the Club for making my time at Southgate so enjoyable, it really is a fantastic club full of great people. Most importantly I would like to thank the players, their effort, energy, quality and enthusiasm made it a pleasure to coach at the Club and an incredibly difficult decision to step away. I wish the team and the Club the very best of luck in the coming seasons.”

Whilst Danny is stepping down as Head Coach we are pleased he will continue on as a member within our club.