A determined performance saw Southgate record a 3-2 win over Sevenoaks in this top of the table clash, and replace their opponents at the head of the table.

A bright start by Southgate saw them totally dominate the first quarter of this game, however they were unable to find the back of the goal with several chances going begging. As the half progressed, Sevenoaks started to enjoy some possession of their own, however it was still slightly against the run of play when Sevenoaks’ Tejinder Hanspal opened the scoring giving the visitors a 1-0 half time lead.

The opening minutes of the second half were a much more even affair, however Southgate levelled the scores in the forty fourth minute through a John Sterlini penalty corner, and then took lead from a close range flick courtesy of Drew Burkin five minutes later. Thereafter Sevenoaks pressed to find the equaliser, but the Southgate defence stood firm before they put the game out of reach via  Joe Bradley and a well worked penalty corner with two minutes to go. Sevenoaks managed to get one back from a Andrew Ross penalty corner on the last play of the match. 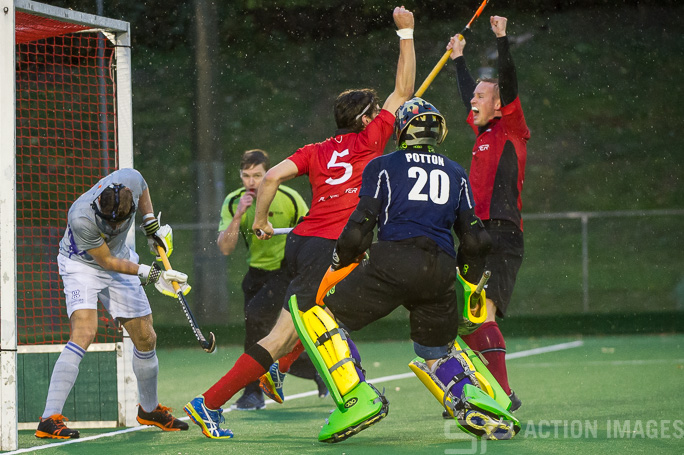 The M2s won 7-0 against St Albans and move up to third in London Prem.

The M3s won 4-2 against Indian Gym and move up to second in London Div 1.

The Flagons remain unbeaten winning 3-1 against Epsom Embers and are still top of London Vet Div 2.

The Magnums win 1-0 against St Albans but somehow still move down to 11th in London Grand Masters Div A.

The Pitchers win 2-0 against Broxbourne M5s and are now second in East 8SW.

The Tankards X result is missing as of Sunday evening, presume they won again!

The Tankards Y drew 2-2 with Stevenage M5s but remain in second place in East 9SW.