Ladies 1s back to winning ways in National League

The Ladies 1st Team managed to put aside the disappointments of the last two weekends to earn a hard earned but deserved 1-0 victory over a strong Chelmsford side. The all important goal was scored after a great interception by Lucy Sheffield sent Elisa Filarmonico on one of her rampaging runs forward to score an outstanding goal . A huge defensive and midfield performance from all Southgate ladies ensured a clean sheet but it was pretty nail biting stuff!! Congratulations to to Alice Stuart Grumbar who had a great game in goal pulling off some crucial saves. Man of the match shared between four players – Emma, Charlotte, Alice and Jordan

Frankie Dixon breaks down the line against Chelmsford

The Ladies 2nd Team had a frustrating 2-1 loss to a physical Milton Keynes side. The experience of the opposition saw Milton Keynes snatch a goal on the counter and capitalise on defensive errors. A slow start meant that a second half camped in the opposition’s final third wasn’t enough to swing the game back in our favour. The goal scored by Bella from a short corner and Man of The Match was Maddy

Ladies 3s ;
The ladies 3s played a game of two halves with an early morning fixture against a large Hampstead and Westminster 4s squad. Being pressed high, and not on top form to start, we conceded two goals in the first half despite the stats (courtesy of Sam) showing that we had been the better run of play on paper. After a quick goal at the restart from H&W putting them up by 3, we showed our tenacity and managed to slam three into the back of the net. Two from Mandy (one of which was cracking reverse stick) and a deflection from
Caitlin fired in from Chloe. After a concerted effort to get one more, the whistle went at 3-3. We’ll gladly take the point, still retaining a spot in the top 3 of the table. It gave us a useful insight into how H&W3s will play in two weeks, and we can consequently come back stronger.

Man of the match went to Jess who played a composed game in midfield and showed her great skills in the middle. Other votes went to Chloe, Charlotte Marshall, and Mandy.

Ladies 4’s ;
The 4s had a much better week and welcomed some new players to the team who had an instant impact; well played Cob, Jess and Skye! Just one pesky goal conceded without reply, but some beautiful hockey played. Congratulations to young Hannah Kilpatrick, Woman of the Week! Final score 0-1. 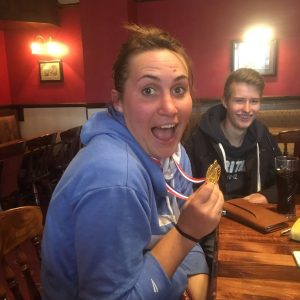 I guess Man of The Match award was THE excitement of the day!!