The M1s produced a battling effort to overcome Bath 3-2 at home on Sunday, a result that sees them remain in third place level on points with Sevenoaks in second.

Southgate got off to an uncharacteristically slow start as Bath attacked from the whistle. This early pressure lead to Bath opening the scoring in the seventh minute as Ben Stone beat Chris Rea in the Southgate goal after the  home side failed to clear the ball. This was Southgate’s wake up call as Jonny Maunder levelled the scores six minutes later via a penalty corner. Thereafter Southgate dominated the first half going ahead in the seventeenth minute after John Sterlini’s initial shot at a penalty corner was saved, he collected the rebound and his second attempt was deflected home by Alex Williams. Williams got his second of the match and ninth of the season two minutes later, finding the net from close range. 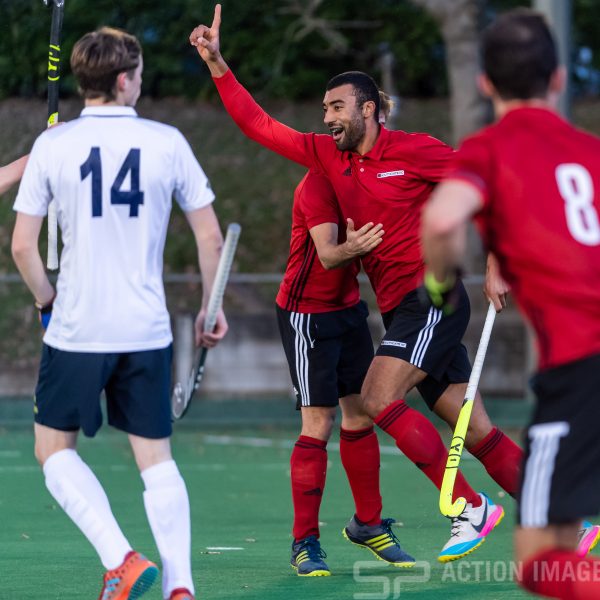 Southgate were then denied a fourth as Paul Pongs saw his effort from the penalty spot denied by Oliver Wickens in the Bath goal, after Williams had been fouled whilst shooting. Bath got one back three minutes from the interval with Stone getting his second via a well worked penalty corner giving Rea little chance. However, there was still time for Southgate’s Max Garner to be sent to the sin bin after he collected a ten minute yellow card for a rash challenge in the Bath circle.

The second half was a tight affair with Southgate inviting trouble almost from the restart as Pongs was also sent to the sin bin after collecting a yellow card for some back chat to the umpire. With the home side now down to nine players, the next five minutes were crucial and called for some resolute defending as Bath pressed for the equaliser, however they were unable to capitalise and the score remained at 3-2. While there were further opportunities at both ends, neither side were able to add to their tally with Southgate collecting the three points.

Southgate now travel to league leaders Oxted on Sunday for their last match before the Christmas break, with a win possibly seeing them go back to the top of the table.