At a blustery Trent Park, the M1s came out on top of a fast and open match as they keep pace at the top of the East Conference.

Old Loughts opened the scoring in the fourth minute through Maciej Janiszewski. The lead was short lived however as Alex Williams equalised for Southgate two minutes later putting the rebound away at a penalty corner. Old Loughts restored their lead in the eleventh minute via Andrew McGregor. Ten minutes later and it was all square again as John Sterlini got Southgate’s second from the penalty spot after his penalty corner was kept out by a defenders body on the line. On the stroke of half time, Joe Sterlini put Southgate into the lead for the first time converting a well worked penalty corner.

Playing with the wind in the second half, the M1s extended their lead in the forty third minute with John Sterlini finding Rob Schilling in the circle who deflected the ball home. Old Loughts were not out of the game and got one back to make the score 4-3 with Maciej Janiszewski getting his second. Six minutes later and Schilling got his second for Southgate after a long pass by Joe Sterlini found him unmarked at the back post for a simple tap in. Three minutes from time, Jonny Maunder got Southgate’s sixth with probably their best goal in a while, the ball being played down the right before finding Adam Grout in front of goal, drawing Fred Whitfield in the Loughts goal, before passing back for Maunder to volley home. William Smith completed the scoring in the last minute to get Old Loughts forth.

Southgate now welcome League Champions Old Georgians to Trent Park on Sunday and will look to end the Champions unbeaten season in their penultimate match. 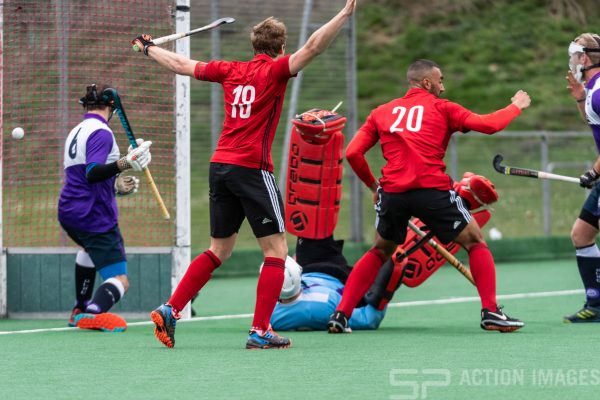