Katie makes it two in a row

In their first away fixture of the season Southgate L1s went down 2-0 to Bedford, despite a second woman-of-the-week performance from Katie Hopkisson. Carla Johl writes.

The home side came out guns blazing and tested our outlet from the get go, spurring us into the game. After a shaky start, we found our feet and settled in for the long haul. Despite finding it tough to break through the Bedford press, our back line and midfield managed to find a few holes to create a few moments of attack. However, after 17 mins the game remained scoreless and neither team were ready to give an inch in the circles.

The second quarter saw Bedford continue to make our lives difficult as they piled on the ball pressure in the midfield pockets. However, strong line balls from Sian Waite out of the back sparked the attack and gave strikers Emily Ruffell-Hazel and Frankie Cox opportunities to put on the gas and threaten the Bedford defence.

Then, in two shakes of a lamb’s tail it was half time and a tied ball game. Drew Burkin offered up much needed words of composure and calm. Moments later we were back on the field and ready for round two. 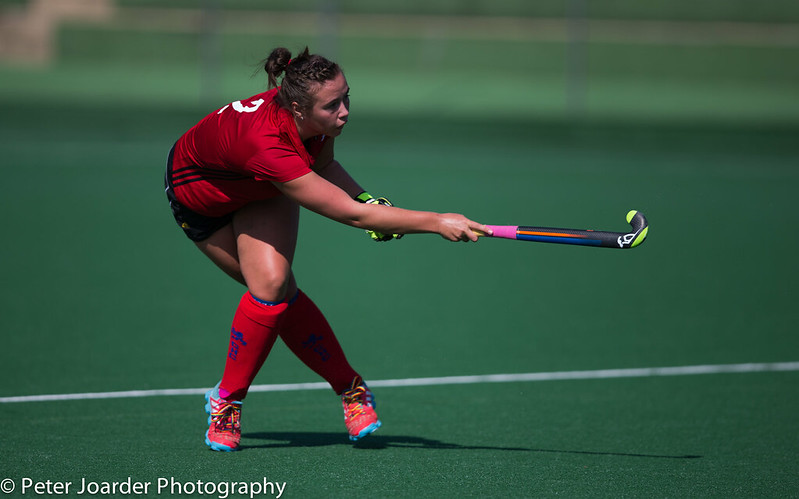 We were quickly kicked into gear as Bedford struck straight after the half time whistle to take the lead 1-0. However, this small set back lit a fire in the team and for the next quarter the girls in white put the pressure on. Tough defence from our back four kept Bedford at bay and some breakthroughs in the midfield by Katie Hopkisson gave us the momentum.  We camped ourselves in the Bedford half and had opportunities up front that kept their defence honest. A number of goal-scoring opportunities were created on penalty corners but we were unable to crack the code as the 3rd quarter came to a close.

The final 17 minutes was a battle-royal with pressure being applied on both ends by both teams. Early in the quarter we spent time with a man down after young-gun Hannah Kilpatrick was given a yellow card for a tough stick tackle. The ladies weathered the storm and with 11 back on the pitch we cranked up the energy.

Despite throwing everything at them in the dying moments of the game, the ladies of Southgate fell short of the win with Bedford slotting a final goal off a penalty corner.

It was a disappointing result and one that has left us with plenty to think about and work on. With her stellar performance in the midfield, Katie earned our Man of the Match for the second week in a row. Next is a home game against Horsham on October 12.