M1s travelled to third placed Sevenoaks as leaders of division 1 South hoping to extend they stay at the top, but it wasn’t to be as they were undone by a more clinical Sevenoaks side going down 4-1. Their second defeat of the season sees them slip to third place in the table, two points behind new leaders Oxted.

M1s started brightly and opened the scoring in the seventh minute after Richard Potton in the Sevenoaks had made an initial save from a Jonny Maunder penalty corner, Giulio Ferrini was on had to put the rebound away on his second attempt. Southgate proceeded to dominate the first quarter, however Sevenoaks earned a disputed penalty corner at the end of the quarter, which was subsequently converted by Andrew Ross to level the scores. 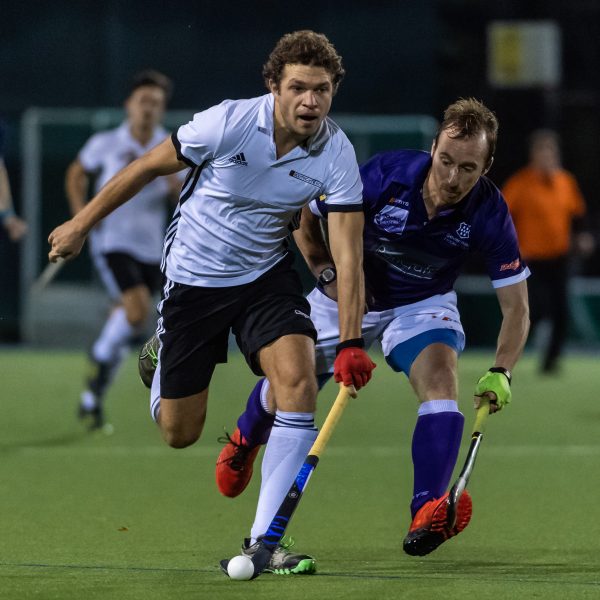 Southgate’s goal scorer Giulio Ferrini on the attack whilst under pressure from Ian Healy of Sevenoaks. Photo by Simon Parker/SP Action Images

The second quarter saw Sevenoaks on top as Southgate were guilty of turning the ball over cheaply, however there were few chances for either side with the half ending all square at 1-1.

Sevenoaks went ahead two minutes into the second half with Ross getting his second after Chris Rae in the Southgate goal had made the initial save from Ross deflecting the ball into the air, only to see Ross fire the rebound into the goal. Thereafter Southgate again dominated the match putting Sevenoaks under considerable pressure, however they were unable to capitalise with Alex Williams going closest seeing his upright reverse shot canon back off the post to safety.

Into the fourth quarter, a well worked goal by Sevenoaks saw Jason Bigara extend their lead to 3-1, and as the quarter progressed  both teams lost players to the sin bin. While Sevenoaks were down to nine, Southgate were forced to roll the dice in search of a goal and sub off Rae in goal to give a three man outfield advantage. However, by this stage nothing was going their way and an aerial ball caught the Southgate defence out allowing Warrington to fire the ball into the empty goal in the last minute to make it 4-1.

Southgate now face a tricky match at home against Bath Buccaneers on Sunday.